It's Time to Rewrite Your Story

It’s about addiction, and I think you’ll relate to it.

While reading, take note of the things that reflect your own experiences…

It’s a quiet evening at Mary’s house. She’s just settled on the couch with a warm mug of tea and a good book, her dog curled snuggly at her side. Her husband is in the armchair beside her watching the game, and everything appears peaceful and relaxed.

But Mary can’t calm the storm of anxiety and worry swirling in the pit of her chest.

She reflexively checks her phone, always within her grasp in case their son tries to reach her. Nothing. She hasn’t heard from him in a few days. Not since he showed up earlier in the week to drop off some of his things in the basement.

Mary had asked him why he couldn’t keep them at his apartment, the one they’d paid the deposit for, and he’d given some vague reply about plumbing repairs. She hadn’t smelled alcohol on his breath, but she wondered. When she’d asked about how things were going at his job, he’d given another vague response, this one tinged with irritation.

“Are you still going?” she’d asked.

“What, you think I’m lying?” he’d snapped back. “Why the hell don’t you believe me?”

She tried to keep her voice level, hoping to avoid another shouting match. “You’ve just gone through a lot of jobs lately, so I wanted to make sure—”

“Oh, so it’s all my fault?” He was yelling now, and she knew any hope of a civil conversation had vanished.

“No, I get it. I’m a fuck up. Nothing I do is right, right?” He threw his arms up. “I don’t need this. How about you let me know when you’re done being a control freak and ready to be a real mom.”

He’d stormed out of the house, slamming the screen door behind him hard enough that it cracked, and kicked over the flower pot.

She’d tried calling him a dozen times since, sending him text after text with no response. Images of him drunk somewhere in the middle of nowhere, passed out behind some dumpster, or worse…dead, bombarded her mind. She couldn’t keep her thoughts from spiraling.

The worry overwhelmed her every moment, preventing her from focusing on anything else, keeping her from sleeping.

The next morning, she finally heard from him—a text message saying he was five hours away and needed to be picked up. Mary called out of work and drove as fast as she could to get to him. She pulled up beside his car in a Walmart parking lot. One glance through the car window and she could see he’d been living in it. One glance at him and she knew he was still drunk. She thanked God his car hadn’t started, or it might have been the cops that had called her, telling her he’d died in a car accident.

Most of the drive back was silent. Mary drove. Her son slept. When they reached her house, her husband was on the front steps, rage in his eyes that Mary knew was covering up his own worry. He stormed up to their son.

Their son, bleary-eyed and barely standing, shook his head. “Fuck that.”

They’d had this conversation before. Mary and her husband would bring up the possibility of treatment, ask their son to even just consider going to a meeting, and always the answer was the same. “No.” Mary didn’t know what else to do. They had made sure he had everything he needed to get better—a place to live, a car to drive to work, money for school—anything that would provide stability. None of it seemed to make a difference. Now she was at a loss. If he didn’t want to get better, they couldn’t force him.

The knot that had been forming in her heart for some time tightened, bringing closer the looming feeling that she was watching her son die, one drink at a time.

She felt helpless. She felt terrified. She felt alone.

You’ve lived this scene, or one very much like it, as your loved one sinks further and further into addiction.

You’ve begged, pleaded, and given ultimatums, and you’ve nearly given up hope, but you can’t calm the worry and fear that threatens to envelop your life every day.

You probably feel like Mary, helpless and alone, trapped by the belief that you can’t force your loved one into recovery. 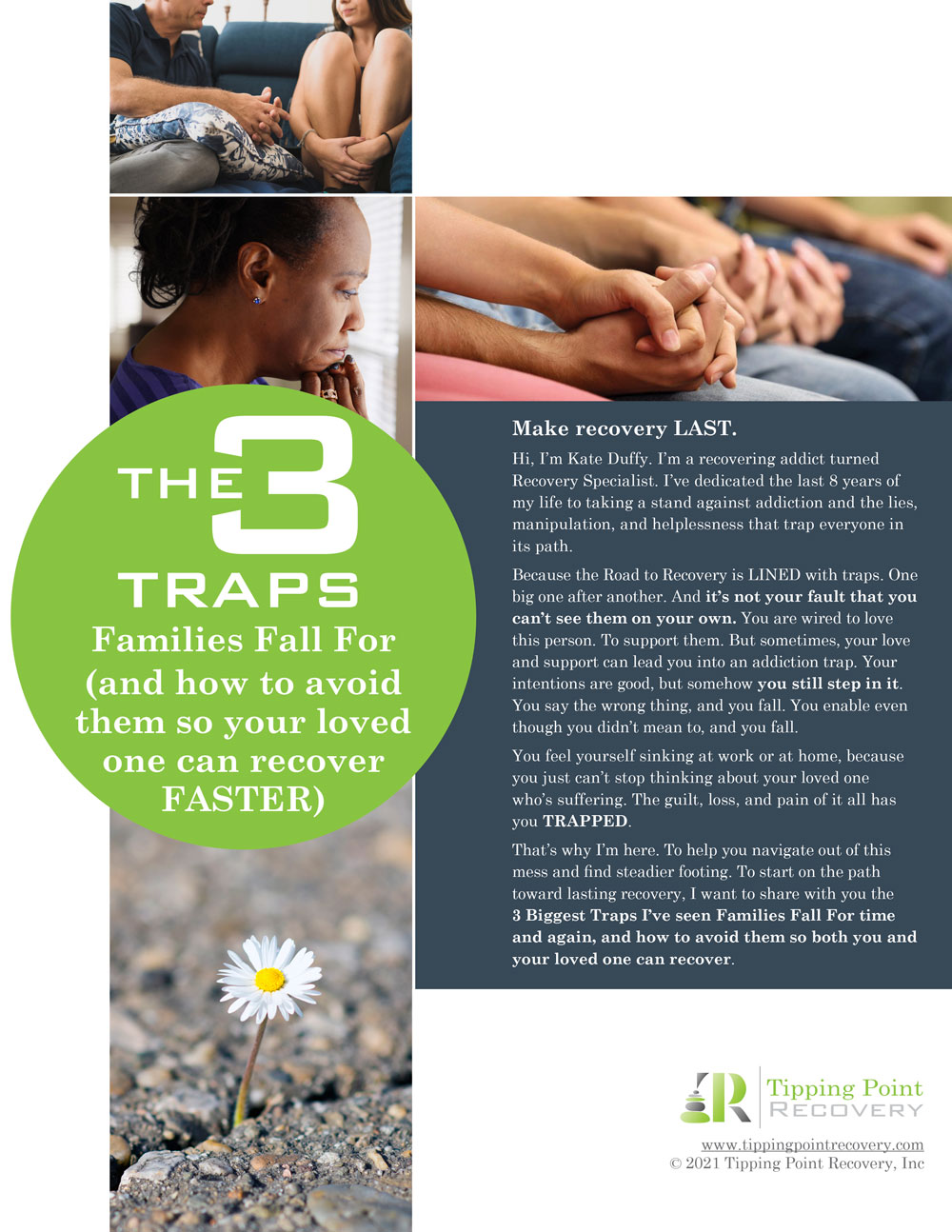 The 3 Traps Families Fall For

Do you keep “falling for it”?

The promise of recovery, the hope, and then the crash landing back into the all-consuming, strangling Frequency of Addiction?

Hi, I’m Kate Duffy. I’m a recovering addict turned Recovery Specialist. I’ve dedicated the last 8 years of my life to taking a stand against addiction and the lies, manipulation, and helplessness that trap everyone in its path.

Trust me, I get it. I’ve been the liar and I’ve been the one being lied to. This disease wants to TRAP us, to ISOLATE each of us in our own cage of guilt and shame, so that we can’t come together.

Because when we come together and help in a REAL way, when families are empowered to unite under the SAME plan, one that actually WORKS…that’s when EVERYONE can begin to recover, especially your loved one.

I’m here to help you navigate out of the Traps of Addiction, so you and your loved one can get on the path of holistic recovery FASTER … and stay there.

If you’re interested in finding a way out, I’ll send you some answers right now. Pop your email here to get: The 3 Traps Families Fall For (and how to avoid them so your loved one can recover FASTER).

A Rewrite of Mary’s Story

It’s a quiet evening at Mary’s house. Her husband is on the couch beside her reading a book, their dog is curled up at their feet, and she’s enjoying a movie on Netflix. Her thoughts drift to their son, who she hasn’t heard from in a few days, but she quickly brings herself back to the peacefulness of her home in the current moment.

Things haven’t been easy with their son the past few months, but they’ve been different ever since she and her husband started the Recovery Conversations™ Intensive course.

She doesn’t give excuses to her son’s job when they call asking where he is. She knows the best thing for her son is to face the full effect of his addiction and that by facing the consequences of his actions, his ability to be successful in recovery is greater.

By facing the consequences of his actions, his ability to be successful in recovery is greater

Instead of giving their son money for rent like they used to, they now understand that by doing so is harming them financially and is also being a resource to the addiction potentially continuing. This pattern was causing Mary to pick up extra shifts at work to cover the cost. They now tell him they love him and they’ll do what they can for his recovery, but they won’t do anything that helps support the addiction. They are going to keep their finances separate from his. They are making their own financial well-being a priority.

They’ve set other boundaries with their son as well, like refusing to be around his drinking. When he stumbles through their door clearly drunk, they tell him to leave, making sure they tell him their love for him is unconditional but their support of him has to be conditional. They can no longer condone anything that is harming him. If he insists he hadn’t had anything to drink, they simply say, “That may be true, but we’d still like you to leave now.”

He was angry about it at first, calling them awful names and saying they were terrible parents, but he quickly realized he could no longer manipulate them that way, and he stopped. In the quiet moments he has after a binge, he’s actually quite happy to see that his parents are setting these boundaries because he knows the chances of him hurting them are lessened. He hates what he’s doing to them, and he’s quietly grateful they have stopped allowing him to do so.

He’s actually quite happy to see that his parents are setting these boundaries because he knows the chances of him hurting them are lessened.

Mary loves her son, but she is strengthening on the inside as she now understands the importance to her, her family and to her son when she refuses to engage with his addiction in any way. She now catches herself if  trying to rationalize it or let her own happiness be determined by her son’s sobriety. She makes it clear to him every chance she gets that she loves him and is always available to help him get treatment, but she is closing the door to chaos in her life.

She leans in to the community of others who’ve walked this path before her for strength when she feels wobbly.

She is learning to meditate. She practices deeper breathing. Often. She feels more at peace with herself, and she now sees that by continuing to commit to her own recovery path, her son will find the way to his.